The management of this period, when the milking of the cow is stopped, is critical for the farm’s performance: it is a phase of rest for the udder, the lactation will start again at calving. Though it is a non-productive phase, a poor management will have significant consequences on the calving and future lactation.

Impact of a non-suitable drying off

The only way for the calf to develop a protective immunity is to ingest a quality colostrum, as soon as possible and in a sufficient quantity. Indeed, the absorption rate of antibodies through the intestinal barrier of the calf will reduce significantly after birth and will close completely after 24 to 48 hours (Serieys, 1993; Matte and al., 1982): an early supply is essential. The zootechnical performances may also be affected by a poor passive immune transfer: a reduced growth and an important mortality rate amongst the calves may be observed.

As for the mother’s health, if the dry period is the most favourable one to cure subclinical infections, it is also the period when the udder is the most sensitive to infections (Eberhart, 1986). Calving is a crucial step, where complications can occur such as retained fœtal membranes, metritis, etc.

Importance of trace elements and vitamins during drying off

During the dry period and preparation for calving, when the development of the fœtus emphasises, numerous metabolic transports of trace elements and vitamins are observed (transport to the fœtus in utero directly, fœtus bonds losses, start of lactation, etc.).

Supplementation in trace elements and vitamins is essential during this period of preparation for calving and includes 3 objectives:

In more details, numerous researches have studied their direct (selenium, vitamin E) or indirect (zinc, copper, manganese, beta-carotene) action, on improvement of the immune transfer from the mother to the calf. For instance, selenium and vitamin E have a complementary role in the distribution process of oxidative stress and enhancement of the immune system. In this way, selenium increases antibodies production and improves lymphocyte proliferation (Spears, 2000; Panousis and al., 2001). Zinc, copper, manganese and beta-carotene also work as antioxidants (Weiss, 2004).

It is therefore clear that the supply in trace elements and vitamins of the mother will boost her own immune system.

Efficacy of prenatal vaccines will thus be boosted thanks to this maternal immunity stimulation.

From a clinical point of view, numerous studies have highlighted the positive effect of a supplementation in selenium and/or vitamin E on prevention of retained fœtal membranes on dairy cow (Pont, 2011). Selenium would reduce metritis, and would cause faster uterine involution on dairy cows having a metritis (Cote, 2005). 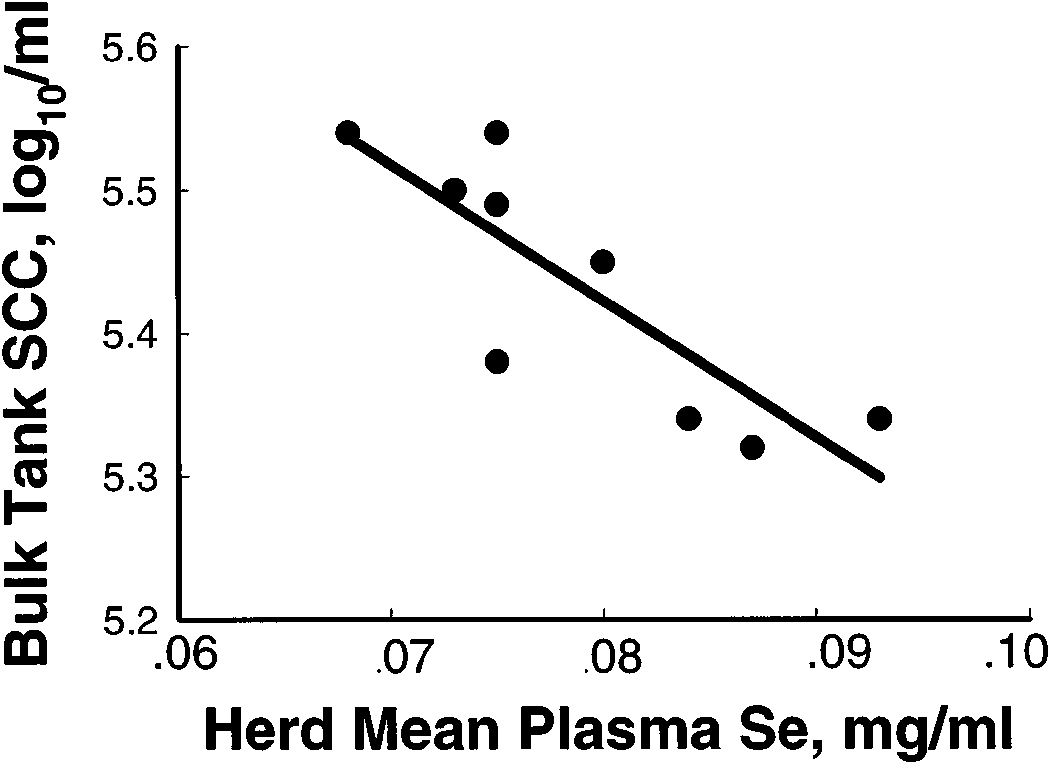 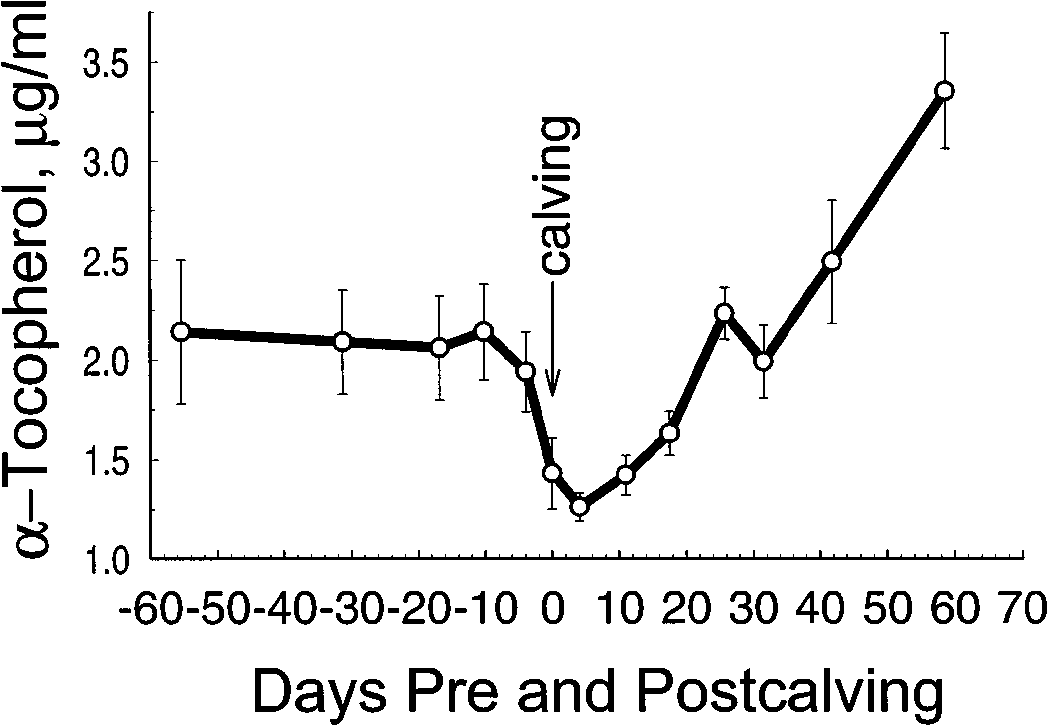 Physiologically, the organism has its blood levels in vitamin E decreasing around calving, as shown on the study (see graph on the left side), where the average values of 270 cows of 9 herds have been represented (Weiss et al 1990). This decrease is normal, even though animals receive normal supply in dairy farms (Stowe et al, 1988; Weiss et al, 1990b). We understand here the importance of reinforcing supplies before calving in order to limit physiological decreases. 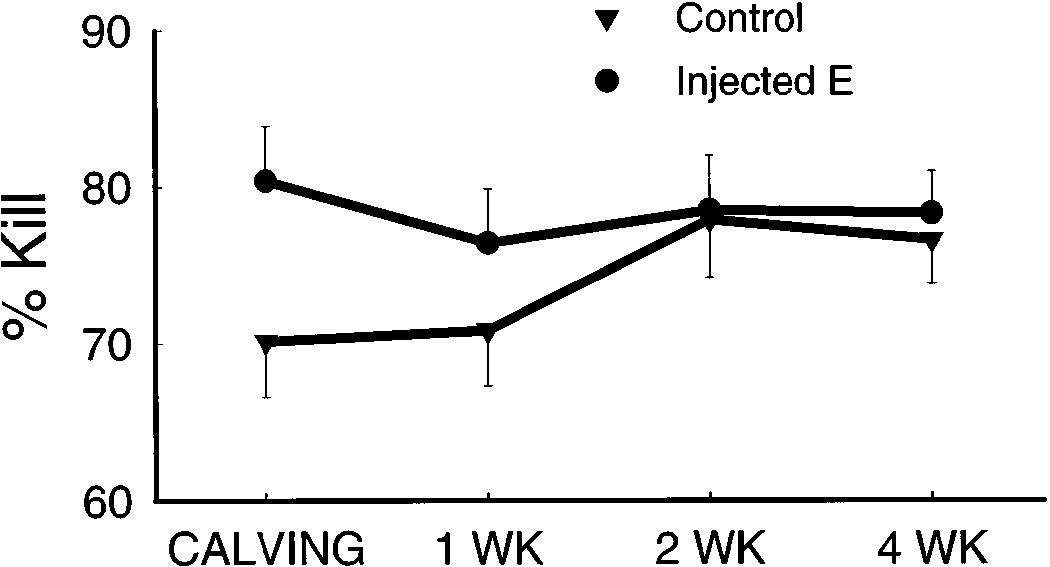 On the other hand, experiments have been conducted with vitamin E supply, 10 and 5 days before calving. This supply has shown (see graph on the left side) improvements in bacteria mortality thanks to circulating neutrophils (Hogan et al, 1992).

To summarize, a good diet rich in trace elements and vitamins will contribute to:

It will also be essential to use long action nutritional supplements that will cover the dry period before calving but also the start of lactation where the exportation of trace elements and vitamins towards the udder is emphasised.

For more information on the products we offer, please click on one of the following options: